THE HEART OF A GIVER

My neighbor Ben is a really good kid. I have enjoyed watching him grow into a fine young man. When I was asked to write a reference letter on his behalf for a college scholarship, I felt no hesitation. And when Ben received notice that he was a recipient, I was honored to be invited to attend the awarding ceremony.

The donor of the scholarships is former Wisconsin Senator Herb Kohl. A man of great means, he left the Senate, sold his pro basketball franchise and (I assumed) was off enjoying life. But here he was in a high school gym on a Saturday morning handing out college scholarships to a bunch of kids. The skeptic in me had one question– why? Soon I had my answer.

The 2017 scholarships were $5000, up from $3000 the prior year. That’s a nice chunk of change for Ben, the son of a firefighter, and the rest of the families gathered that day.

As the names were about to be announced, a voice in the crowd yelled that there was a mistake. The emcee had the wrong script. There was a very pregnant pause…and then the emcee read from the new script that indeed a mistake was made.

That’s when I understood. As the crowd jumped to their feet and cheered, I looked around me. Astonished and happy tears were on the faces of every kid and every parent. And there on stage with a big grin was the Senator. Over the next 30 minutes he would greet and shake hands with each teen. The whole time the smile never left his face.

It’s easy to become cynical about “big check” presentations. It’s easy to scoff that someone “just wants to put their name on the building.” These rituals and recognitions are important though, because they allow us to get a glimpse into the heart of a giver. 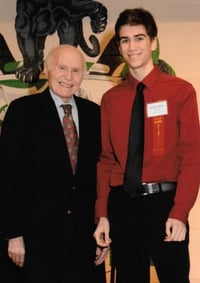 People give for all kinds of reasons. We should never assume we know the motivations of a particular donor in any given situation. When we get a chance to sit down with a donor, we can ask about why they give, which is an amazing opportunity.

But never underestimate the power of letting a donor see their gift in action. They are not only (and justifiably) proud that they were able to help, but they are also grateful to meet the people who they’ve helped. Generosity benefits the heart of the giver as much as the life of the recipient.

When was the last time you had a chance to see into the heart of one of your key supporters?

Thom has held executive positions with YMCAs in Albuquerque, San Jose, Chicago and Milwaukee, allowing him to develop expertise in leadership, group work, strategic planning, volunteerism, and staff development. He has demonstrated a keen ability to listen to and understand an organization’s needs, helping them bridge the gaps between status quo and mission fulfillment.